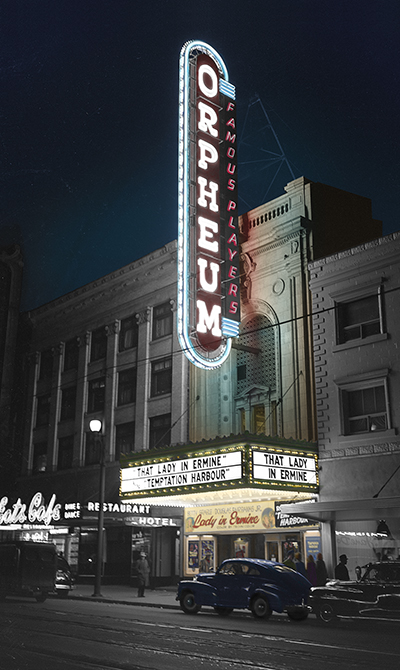 The Orpheum debuted in 1927 as Vancouver’s biggest vaudeville house. Later it transitioned into a movie palace and eventually a concert hall.

Through its over 90 year tenure, the opulent venue has hosted everyone from visiting royalty and political leaders to wartime recruiters and charitable organizations. Patrons travelled to Vancouver from around the world to experience legendary performers like Fred Astaire and the Marx Brothers, as well as up-and-comers like tap dancer Bill "Bojangles" Robinson. This connection to a range of cinematic and live entertainment continues today with the venue regularly hosting classical music performances, film viewings and live shows.

Though the Orpheum has undergone extensive renovations in the last decades, the current venue retains key elements of its former splendour. Grand staircases lead to a series of lobbies. Scores of arches, varying from rounded Romanesque to pointed Gothic, lend the building a sense of progression and lead the eye to the proscenium stage.

These elements, combined with technological additions and state-of-the-art upgrades, contribute to the Orpheum's historical narrative, bringing the theatre into the 21st century while paying homage to the era from which it came. 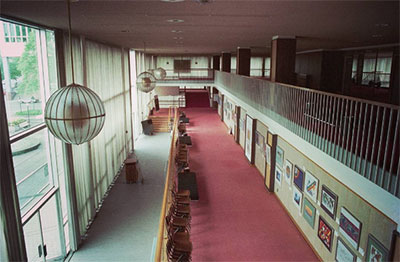 Built in 1959 as part of an international design competition, the Queen Elizabeth Theatre served as a prototype for more than a generation of theatre complexes across Canada and the U.S.

The architects' vision was to create a "strong, unitary building" that gave "maximum delight and spatial excitement". The finished building featured an aluminum-and-glass curtain wall wrapped around the lobby exterior, bolstered by concrete columns and shear walls; the lobby was made with B.C. fir panelling and terrazzo floors, while the auditorium was finished with Japanese Ash.

The impact of the theatre was immediate and profound: for the first time, major roadshows like My Fair Lady were able to stage productions in Vancouver, and shows staged across the U.S. border were compelled to extend their productions to Vancouver. Drama, opera, and the symphony were core activities, though the theatre also hosted events ranging from performances by internationally recognized artists to political meetings and holiday parties.

Today, the Queen Elizabeth Theatre is home to the Vancouver Opera, Ballet British Columbia, and larger touring shows, and is currently in the midst of a long-range strategy for restoration, rehabilitation, and renovation. 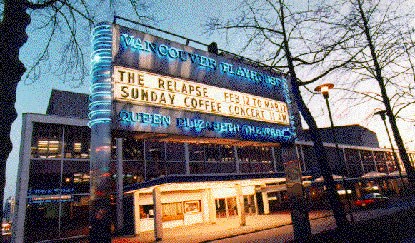 Built in conjunction with the Queen Elizabeth Theatre, the Vancouver Playhouse opened in 1962 at a critical point in the development of the performing arts culture in Canada.

During this time, vaudeville was declining in favour of cinema as a more popular form of entertainment, and facilities for live theatre and musical groups were scarce. The Vancouver Playhouse and Queen Elizabeth Theatre were built out of necessity for auditoria where "important musical and dramatical events" could be staged for city patrons.